UtterDisbelief said:
Great. Thanks for the update.

Let's see if it is repeatable. The problem is the Nvidia code-signing which has expired.

Yup Yup that is the error. repacking should sign the pkg and you will be good to go or at least thats how it happened with me.

lmk if that helps

UtterDisbelief said:
Great. Thanks for the update.

Let's see if it is repeatable. The problem is the Nvidia code-signing which has expired.

Also here is the link to the thread where I found the info. Like I said worked for me. I left some screenshots in another reply post. 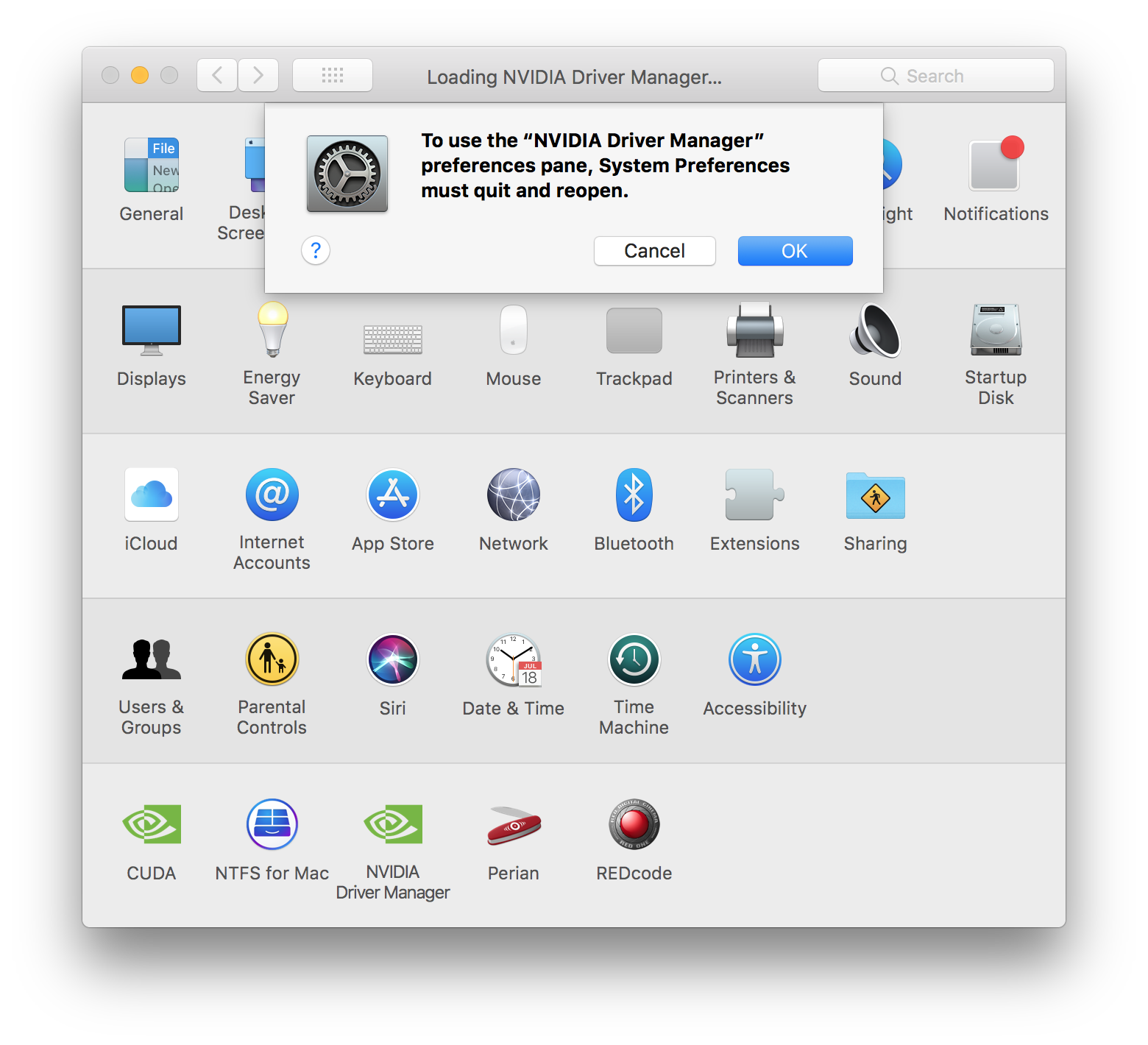 Since June 01st the drivers for my Titan-X (Maxwell) PCI-e GPU were not working anymore. When I tried to reinstall using WebDriver-387.10.10.10.40.140 it appears that the certificate is not valid anymore. The preference pane panels for both CUDA and NVIDIA Driver Manager were not working: I...

Yup Yup that is the error. repacking should sign the pkg and you will be good to go or at least thats how it happened with me.
Click to expand...

Hopefully we'll get feedback as more people try this.

(I still can't get my head around how Nvidia's revoked certificate can be re-signed just by repackaging it locally, but hey, if it works ... )

Many builders these days keep SIP enabled for security.

Thank you so much, and P1lgrim for sending me to this post. Have been struggling since Friday

This is working for now.

wstrohm said:
A little too radical for me (and too late anyway), but subsequent posts seem helpful, although over my head. I guess I don't understand the concept of an app's signature "expiring" once considered valid. Why would that be necessary? (I am unfortunately acutely aware that although my personal signature is considered valid, it will inevitably "expire" along with me in a few years, but why deliberately disable a working piece of hardware just because it's old?)
Click to expand...

Why are certificates limited in time?

If a certificate has a limited duration of, say 5 years, but it gets somehow compromised after 2 years, waiting the 3 remaining years for it to get invalid is not a real solution to the breach prob...

This is a pretty good overview of why certificates in general expire. Apple isn't specifically targeting users of the Nvidia web drivers with this, it's just an unfortunate side effect of what are considered security best practices.

wstrohm said:
1) I would then be on the APFS file system, which I abhor.
2) I would not longer be able to play Myst IV Revelation, Myst V End of Ages, URU Complete Chronicles, or any 32-bit app, on those computers.
3) I would be poorer by $300+.
4) I would have a working Gigabyte Nvidia GT1030 and a working GTX 1050 TI OC graphics card but no way to use either one.
Click to expand...

Due to inflated GPU prices and gamers demand you can easily sell those two cards and get a couple of RX 460/560s that should work with High Sierra. Stay on HFS+ keep playing your games, use 32bit apps etc.

darukaru, thanks for your insights, I appreciate that. Lots of good info there.

this method doesn't helped me

See conversation with nvidia support from 6.6.2022

Ben Stevens (from Nvidia Support ): Hi since 2. Of June a lot of Nvidia User and me got this problem: NVidia WebDriver-387.10.10.10.40.140 Signature/Certificate invalid. GPU Kexts unable to install/load.

Arun: I am sorry for the inconvenience and would be glad to assist you

Arun: what is the graphics card and the Operating System ?

Arun: thank you for the details

Arun: unfortunately the drivers for this configuration are not available on the NVIDIA website

Arun: The graphic cards for Apple are custom designed by Apple to suit the MAC architecture hence the drivers are fully controlled by them to support individual OS or later updates, etc., This needs to be approved by Apple that a compatible driver is available for the OS

Ben Stevens: So who released the webdriver? Apple?

Ben Stevens: This is a NVidia software for NVidia cards…

Arun: yes the point of contact would be Apple for the compatible drivers

Ben Stevens: it’s not from Apple

Arun: you may click on the following link for the driver from NVIDIA, however unfortunately it does not include the graphics card you have mentioned, GTX 980 Ti

Arun: the only cards that were supported by this driver are listed under the supported products on this page

Arun: if there were drivers available, we would have definitely offered them to you

Arun: the best might be to check with Apple for information on this driver

Arun: sorry please ignore, this driver too is available on the NVIDIA website

Ben Stevens: Why should Apple deliver support for Nvidia driver released by Nvidia when the certificate ended intentionally by nvidia?

Ben Stevens: We both know that Apple wouldn’t support

Arun: could you let us know where do you see this information ?

Ben Stevens: This installer (see gif) is from Nvidia right? So the webdriver is and always was

Communication with Oracle Service Cloud Chat service has been lost. The chat session has been terminated. Check your network connection and verify that you can connect to other sites on the Internet.