Not many computers were showcased in the “Museum of Modern Art” in New York. The Apple Cube from Jonathan Ive is shown there. But not only there. It’s also on my desk at home but not with parts from 2001.

Step 1: Disassembling: I used a 10 years old "Apple Cube" as case for this mod. It took a day to remove all the original components without destroying something. After that I had some old 450MHz, 20GB HDD components and labelled envelops with screws and small parts I want to reuse.

Step 2: Cleaning and polishing: I got the Cube from eBay and the Plexiglas is telling a story about the previous owner. A lot of scratches all over the case. Not good! So I bought "Xerapol" which is a plastic polishing compound that should help. And it did. After hours of polishing it looks brand new.

Step 3: Building acryl glass frames and baseplates: After that I made a Plexiglas frame for the DVD drive that centers it under the hole in the case. The graphics card also got a baseplate with a PCIe riser card for the ATI R6670. The SSD was screwed on the DVD frame on top of the HDD case of the 2 Samsung 2.5" HDDs which are running in RAID 0.

Step 4: Cutting holes: The "Dremel" rotary tool was my best friend during that time. I made holes for the mainboard and graphics cards connections with it. This tool is also great for the Plexiglas work. Even the CPU cooler (Prolimatech Samuel 17) needs to be shortened a little bit.

Step 5: 24pin cable for PSU: The Cube gets a PicoPSU with 160W that is connected with an extension cable. All the stuff that you can buy has a length of 30cm or 50cm which is actually too long for such a small case. So I bought an "ATX Power" male and female connector and build it exactly for the required length and radius of curvature. But the most important was the gluing of the single cables. See the photos for more details.

Step 6: Mainboard: The Mini-ITX board with 170x170mm perfectly fits in the Cube case. Some conductive parts of the case need to be isolated before the board can be placed into the case. First I tried to take the "EKL Alpenföhn Panorama" cpu cooler but the height was too much for that small case. I wanted to keep the original holing mechanism so the available space for the cooler is just a few centimeters. The only available smaller cooler was the "Prolimatech Samuel 17" which is really great. The space between the both parts of the holding mechanism (after sawing it up) is exactly 92mm. Perfect for a "be quiet! Silent Wings PWM 92mm" fan.

Step 7: Power supply: The best power supply for such a small case is the PicoPSU as I already mentioned. It could not be installed directly on the 24pin connector because the 12V and 5V cables are on the wrong side. That's why I had to build my own cable. I cutted all 12V and 5V cables for the drive, SSD and HDDs so they fit perfectly and soldered them together.

Step 8: Cooling for the 6670: The original passive cooler on the ATI Readeon HD 6670 is great and very small. But the plastic case for the 55mm fans is too big for the small Cube. They are too loud also ?. So I build a plexiglas frame of a 10x10mm stick with two other 50mm fans from “Fractal design”. This solution is much thinner and not so noisy.

Step 9: Touch Sensor: I found a manual for using the original touch sensor with a normal mainboard. But it only works for pretty old mainboard (I tested it with a Socket A board and an AMD 3000+). So I needed another solution. I found a company that produce small touch sensors for bathrooms which works with an electric field. The sensor is supplied with the "5V standby" voltage of the PSU. It works in the same way as the original Cube does. It is started when the hand or an objects gets in the detection area. The field is enough to get through the 1cm Plexiglas. I had to shield the electrical field with a lot of material because the sensor is located near the 16GB RAM.

Step 10: Installing MacOS X: First I flashed the BIOS “F7” for my GA-H67N-USB3-B3 board. After that, I took the great “Mac OS X Lion” manual from tonymacx86 & MacMan to build a bootable USB stick with Lion from the AppStore. I used the BIOS setting from the Snow Leopard "iBoot + MultiBeast" manual. After the installation process I downloaded the DSDT F7 for my board and run MultiBeast with the following settings. And everything works fine. 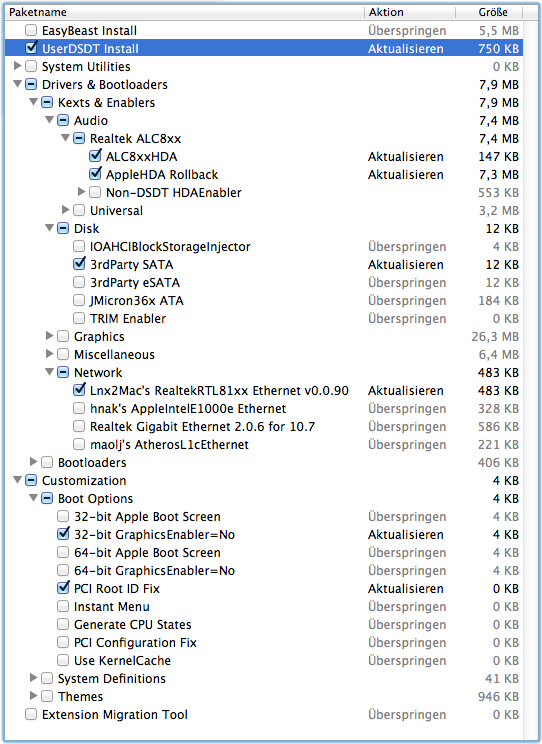 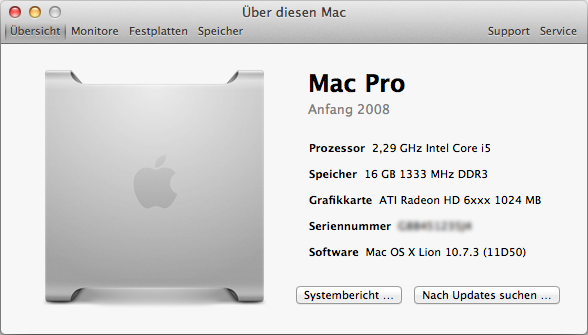 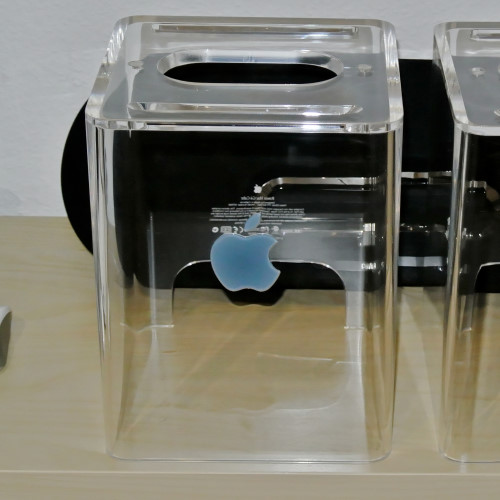 After a few hours of polishing it looks brand new. 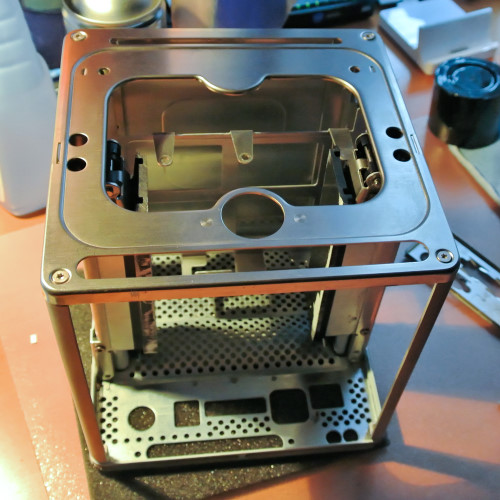 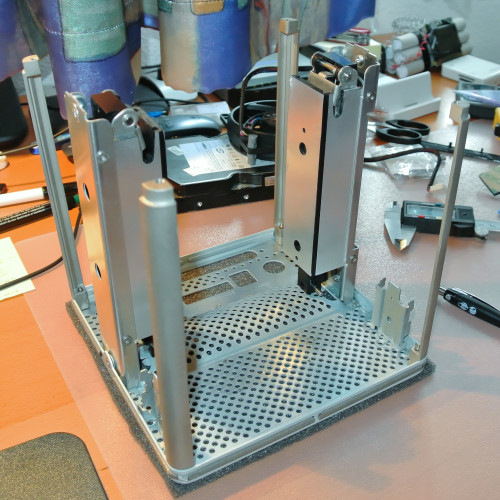 The passive cooler after sawing and filing. The holding mechanism can still be used. 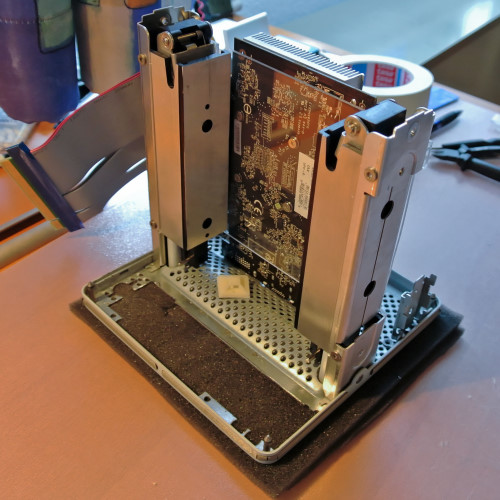 The ATI R6670 graphics cards is screwed on a Plexiglas plate 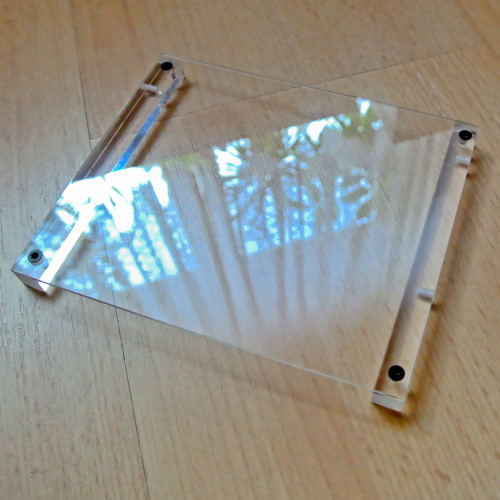 Plexiglas frame for the DVD slot in drive 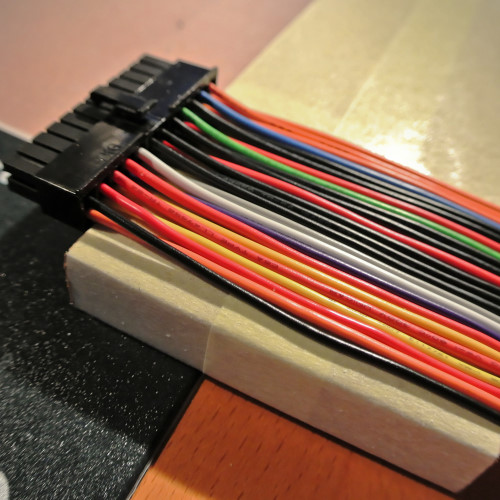 Preparation of ATX male connector for gluing of the single cables 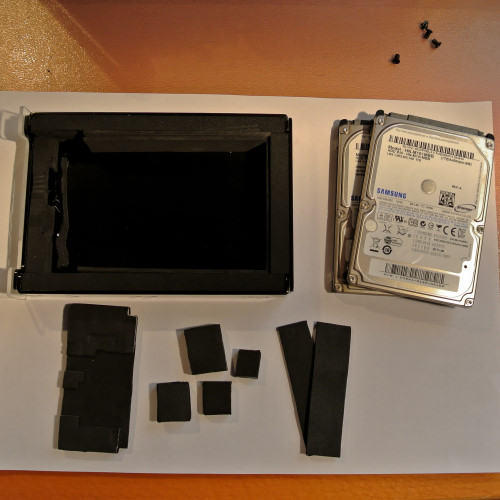 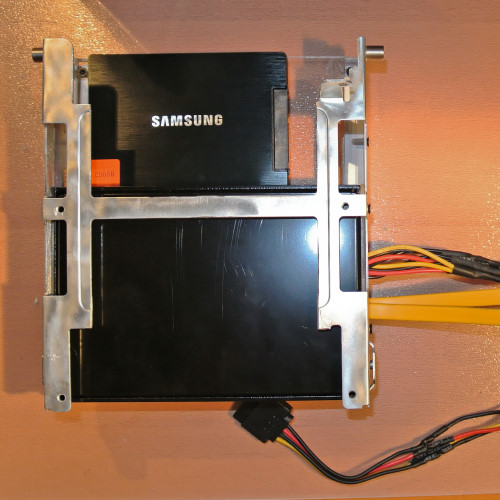 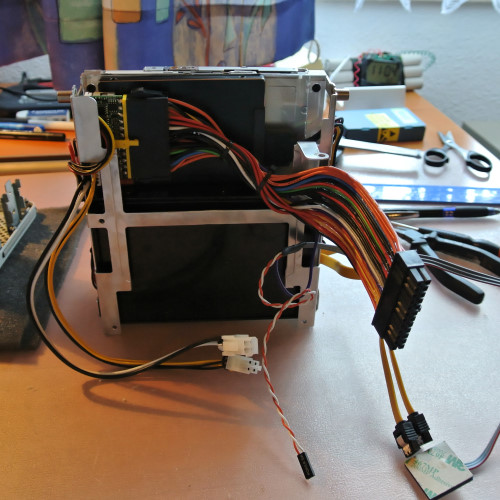 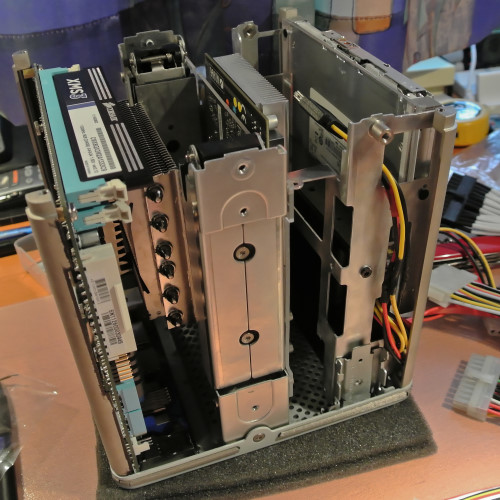 Mini-ITX board, ATI R6670, HDD and drive inside the small case 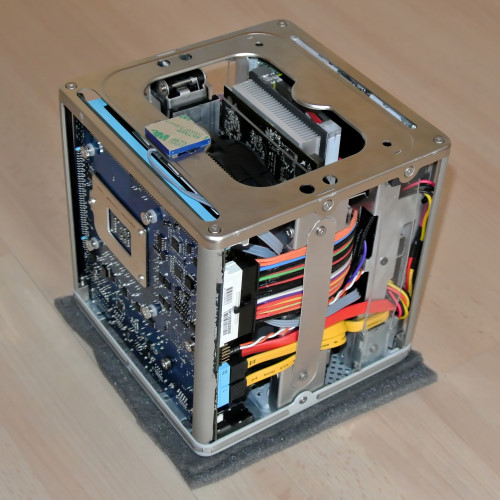 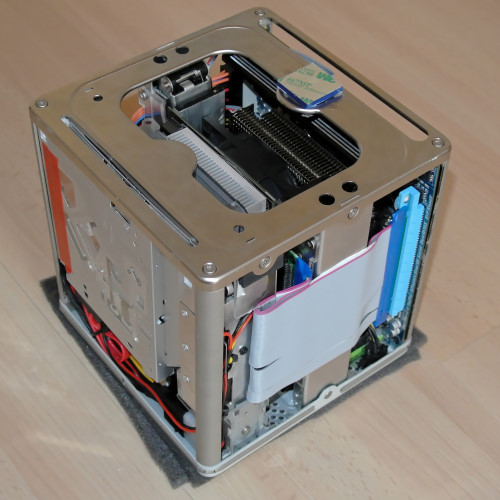 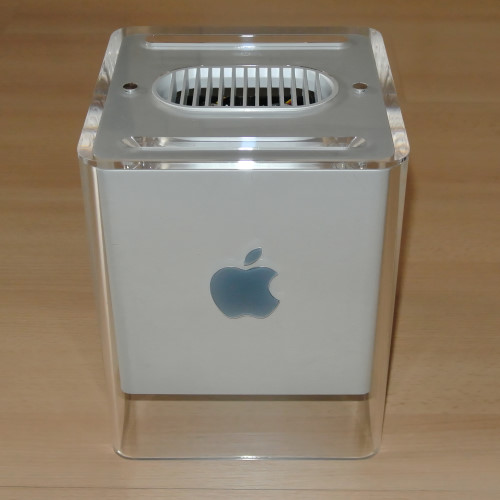 You don’t see that brand new components are working inside this nice case.

The Cube is very quiet. When the two 40mm case fans are running faster the temps are lower (about 5-10°C). Keep in mind that the case is reaaally small ;-)

Particularly on actually getting a discrete graphics card in there! Got any pic.s of the underside you can post?

How are the temp.s looking?

Mods of this calibre are seriously lacking on here.

VERY nice mod!
Not even interested in benchmarks on that one.... Just such a clean mod on a 27" ACD must be impressive to look at.

You should take it to a genius bar for the fun of it ...

I added a "Benchmark" and "Temperature" section in my post.

The underside is not the best side of the Cube... hehe. I will make one...

Cool - also interested to know how close to the limit you are pushing that pico psu.......have you tried pushing the graphics card a little to see how it handles it? I think what you are doing is great and it must be right on the edge of what is possible in this case.

Can't believe you were able to squeeze a 6670 in there.

I would like to see your final bottom plate and understand more on how this cube cools itself.

neilhart said:
.... understand more on how this cube cools itself.
Click to expand...

The Cube has a 92mm fan for CPU cooling which is the big white fan in the front.
The ATI R6670 is cooled with two 50mm fans which are also shown in the picture.

Very nice work! I love how clean this mod is and the attention to detail with small things like the cable routing... makes a huge difference. Does the graphics card work properly even with the PCIe extension cable? I remember reading something about the latency causing issues for graphics cards, but if it doesn't... that's a great solution!

Either way, awesome job! I don't think anyone has ever crammed this much modern tech into a Cube before.