I know a lot of you are trying to find a cheap FireWire card that works well with OS X, but I'm sorry to say that this thread isn't about that.

Instead, I'd like to recommend a specific card, that I know works flawlessly with OS X. Why? Simply because it's the same chip Apple is using in all of its current machines. I have actually installed one of these cards in a system, so I know it works.
It's based on the LSI/Agere FW643 chipset which is as far as I'm aware, the only native PCI Express FireWire 800/400 chipset.

In the US, StarTech offers three different versions with the PEX1394B3 being the one most of you would look at getting http://intrl.startech.com/search?search_term=PEX1394B3
However, you could save yourself over $30 by hitting up Amazon http://www.amazon.com/StarTech-com-Express-FireWire-Adapter-PEX1394B3/dp/B000WCT5HK for the standard PCI Express card.

Note that other so called PCI Express chipsets, like the ones from TI are not native PCI Express FireWire chipsets. Instead, TI figured they could save some money, so the slapped their old PCI based FireWire controller on the same chip package as a PCI to PCI Express bridge and called it a day. I know a lot of the musicians and music producers out there are concerned about latency and it's possible that this is what you get with this bridge. You might as well get a native PCI card then and put it in one of the PCI slots on your motherboard, as the 6 and 7-series Intel chipsets (not counting the Q and B series) rely on a PCI to PCI Express bridge as well.

Hopefully this will help some of you solve any issues you're having with regards to FireWire. And if you don't believe me that this is the chip Apple is still using, iFixit has my back, as you can clearly see it the picture below which is of the 2012 MacBook Pro motherboard, where the LSI controller is located between the blue and pink squares. 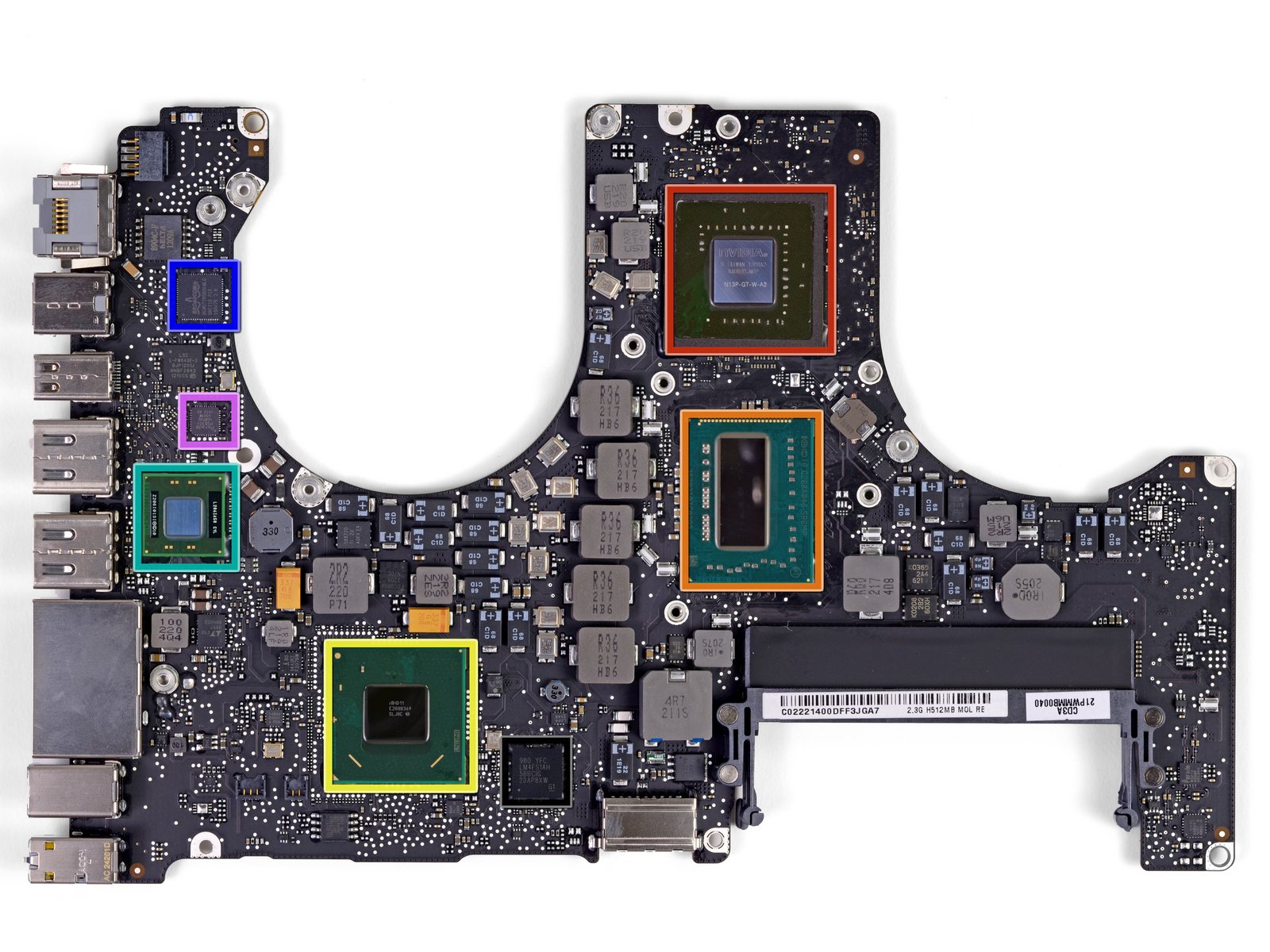 A few years ago, I owned two firewire cards. They had different chipsets, both made by TI. After running hard drive speed tests with XBench, I found that one of the cards ran at a considerably lower speed than the other. I found another card with the same chipset and purchased a replacement. As expected, it ran at the same speeds as my first card.

Not sure if it's still available, but if you can find the XIO2213 chipset, it will work flawlessly!

Thinking of buying this

yeah, except that's the controller I mentioned from TI that's not native PCI Express.

The Texas Instruments XIO2213A is a single-function PCI Express™ to PCI local bus translation bridge where the PCI bus interface is internally connected to a 1394b open host controller link-layer controller with a three-port 1394b PHY. When the XIO2213A is properly configured, this solution provides full PCI Express and 1394b functionality and performance.
Click to expand...

Make what you want of it, but I'd rather not use a product like that.

And can I ask, why would you waste $100 on that card, when you can have the same TI chip on a generic card for far less money that will work just as well?
This is literally the same PCB, just in black instead of purple, with a smaller crystal and a FW400 port instead of the third FW800 port and it's $25... http://www.newegg.com/Product/Product.aspx?Item=N82E16815124107

I got one of these because it was the only one i could find locally here in NZ and it was cheap (seems to be REALLY old stock in every shop). The datasheet says the controller is a LSI FW643 so i maybe lucked out yeah? It seems to work fine so far anyway.

The PCB layout doesn't really matter, the chip is what counts, well, at least as long as the engineers didn't royally screw up...
Sunix makes some decent stuff and there's no reason as to why that shouldn't be a good card. Hey, you even got an internal port which is rare these days, not that it's of much use for most people, but hey

Well i sorta understand all the hesitation from musicians, as i'm one myself
When I used the FW port on the U5DH i had 4 freezes in an hour time... not stable at all.

(while for some reason the same chipset under windows works like a charm!)

For some reason, everyone, even manufacturers (like MOTU), recommend TI chipsets.

I bought a 13$ FW card off of ebay which had a TI chipset on it and that works properly ever since...

But what's the advantage exactly of the one you're bringing to the table?

That said, if you're using that card in a 6 or 7-series chipset motherboard, it'll go via a PCI to PCI Express bridge chip, which might in turn be connected to a PCI Express to PCI Express bridge/lane multiplier. For people like you, that could potentially mean extra latency which is an unwanted thing, correct?
TI has moved the bridge on the motherboard inside its "PCI Express" chips, whereas the LSI chip doesn't have that. So even worst case scenario, you do have at least one less step between the card and the CPU.
I'll freely admit I don't know how much of a difference it'll make, but I guess Apple must have a good reason for using it over TI's solution.

As for the VIA chip on your board, well... it's a cheap solution, it's a PCI chip, it connects over a pair of bridges... shall I go on?

Huh, interesting. Thank you, TheLostSwede for the OP. I notice that StarTech are also responsible for the Mini-DisplayPort (f) -> DisplayPort (m) adapter that I use on my rig to adapt my Apple Cinema Display to my motherboards integrated graphics. http://www.amazon.co.uk/gp/product/B003N3DTKY/ref=ox_sc_sfl_title_9?ie=UTF8&smid=A3P5ROKL5A1OLE. I wonder if StarTech are intentionally making products to support the Hackintosh community?

thelostswede said:
For people like you, that could potentially mean extra latency which is an unwanted thing, correct?
Click to expand...


thelostswede said:
I'll freely admit I don't know how much of a difference it'll make
Click to expand...

Me neither. But i must be a matter of milliseconds, and as my buffer always is at 256 samples or above, while producing (not recording) that's not such a big issue for me.

I personally never experienced any difference...

But then again, though i've always chose FW over usb, i feel like firewire is dying a slow death... more and more manufacturers are either making there devices USB/FW hybrid, or going to USB3 or Thunderbolt.

Does the usb-cpu-consumption really matter when CPU's are getting faster by the minute?

Does OSX handle FW so different from WIN? How can my Motu 828mk3 or Ultralite mk3 for example work flawlessly under win7 and crash every 15 minutes under hackOSX with the same hardware??