I just got a T9E a few days ago and am having the same problem in macOS, but only after waking from sleep. Speed test shows 176 mbps, but after sleep it falls to between 2 and 5 mbps. Restarting fixes the issue until the next time the PC sleeps.

has any one found any solution to this issue yet?

2021, checking in to see if anyone found a resolution for this. I'm getting very poor performance from my AC1900 PCIe card. I'm tempted to start drilling and running Cat6e between floors.

Speedtest.net results on the same computer using the same T9E AC1900 in the same room:

why is this approved hardware? I bought it just for this also.

Wasn't cheap either. I need to replace the card but I'm no longer sure what component to buy to avoid further issues. The N900 recommended in the guide seems to be out of stock everywhere. Perhaps it's no longer in production.

I have this same issue on Mojave 10.14.6 (on a HP 8300 MT). I thought the problems were fixed when i switched the card to a different pci-e slot maybe a year ago, but when i got a new router i noticed this problem. Also when running network diagnostics i got a kernel panic. Ugh. Trying to find a solution now.

Apparently it uses Broadcom BCM4360KMLG (as mentioned here) so it should work even in Big Sur since it's found (well BCM4360 without KMLG as far as i was able to find) on many macs that are supported.

I'm thinking if this has to do with a) some kext mismatch b) wrong setup in config.plist c) smbios (i'm using 13,2). Since it's mostly working maybe it's not using BCM4360 driver or the correct layout id etc for it but i don't know how to find out or troubleshoot this properly.

/// UPDATE ///
I switched some pci-e cards around and now it works properly! Funnily had to move it from x1 to x16 slot cause my gt710 heat sink is big (it went to the x4 slot) and that's the only option.
I also tried airportbrcmfixup.kext as the driver before switching slots and it didn't make a difference. I think it uses the same driver anyway natively, it just get's it from the OS's native driver package. One thing it did change was Card Type in system information from Third-Party Wireless Card to Airport Extreme, but that's just cosmetic probably.
Oh and the kernel panic happens if you run Wireless Diagnostics and make it do the report. That seems to be the case for others with working builds as well so seems it's a hackintosh thing. Might be just a Mojave thing though, cause my laptop with Sierra didn't panic. But that's of no importance, just a curiosity .
Last edited: Feb 11, 2021

JingleDjango said:
should the T9E AC1900 remain on the Buyer's Guide in light of these reported issues?
Click to expand...

It was removed a few days ago. We replaced it with the two Fenvi cards that work OOB and have BT built in. Make sure to buy direct from Fenvi US on Amazon and Newegg. There are other sellers of variants of these. Some of them don't work. The one BCM94360CD called YOUBO on Amazon does work with no issues. See the attachment below. 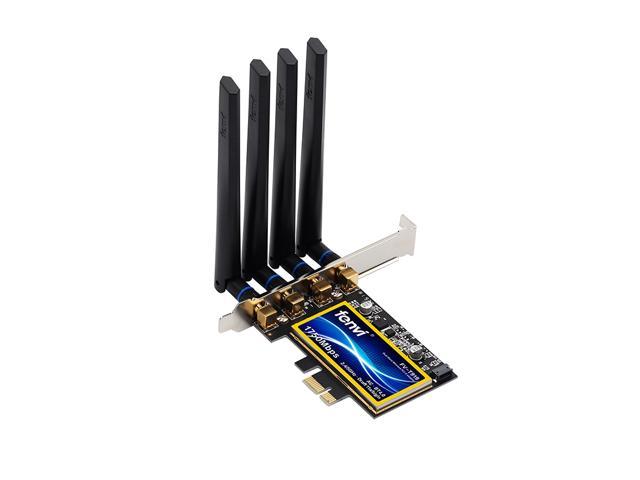 Stork said:
The T9E is a WiFi only PCIe card. You'll need one of the proven BT USB dongles to augment it.

I use the T9E and the GMYLE BT USB dongle on one of my systems (Zippy). Both the T9E and GMYLE work OOB for me since El Capitan.

I'm having similar issues to the ones listed in this thread. However, I'm getting around 30MBPS which leads me to believe that its because I'm connecting to my routers 2.4GHz maybe?? Here is my system info on my network/specs/EFI. Let me know if you see anything missing/wrong here. There was a point before I did a fresh install recently to troubleshoot something else that wifi was working at 200Mbps so I know its possible.