at first I would like to thank all of you for all the great guides and the great work put into this forum. Thats GREAT! Without this Forum my project wouldn't be possible.

Some weeks ago I watched a YouTube Video about a little but powerful Mini-PC found on AliExpress.
I immediately made a connection to the 2018 Mac Mini that shares some of the same specs.

The Mini-PC can be bought with in the following configurations:

This is just one Link you can find them everywhere on AliExpress: 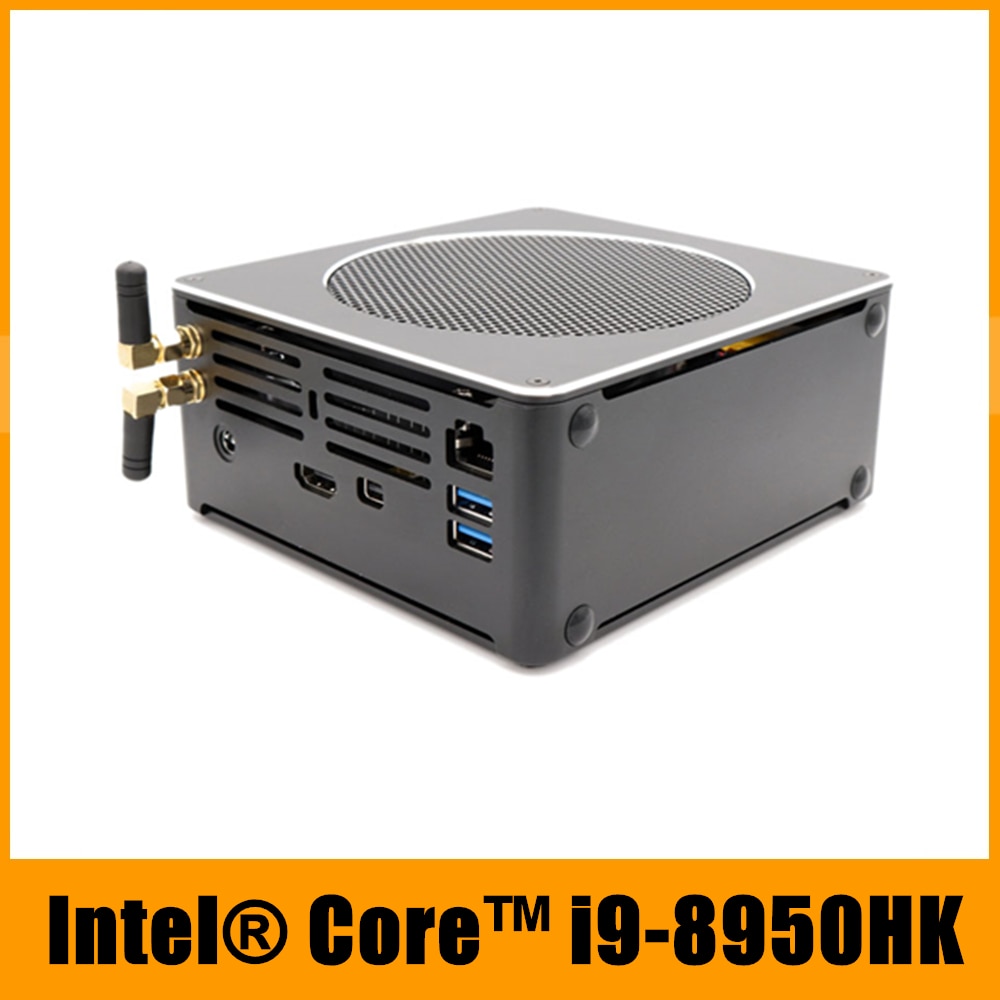 Thats a pretty good price point for what you get. Especially compared to well known brand NUCs.

And the Rest of the Mini-PC doesn't look bad either.

I did choose the i7-8750H because I know the CPUs Performance from my Notebook and it looks likes the most reasonable best bang for the buck.
The Xeon looks also pretty good but I didn't know how it will work out because the iGPU is basically the same but called differnt (P630).
The i9 looks a little bit overpriced with nearly 200 $ more for just some MHz more and not even more Cores.
But the i9 in Unlocked and in the BIOS is a section where the Multipliers seem to be changeable when you have a unlocked CPU.
Could be possible to take all CPU Cores Turbo Ratio to 4,8 GHz and make a pretty fast machine!

Something like the 3 Intel Core CPU Configs is just whan Apple uses for the Mac Mini Configs.

The CPU is cooled by a pretty basic like Intels boxed coolers looking Cooler with a slim low-profile Fan. I will take a closer look at the temps when I have some time to stress-test.

It comes as a Barebone NUC without RAM and Storage, but you can choose them when you buy on AliExpress.
I highly recommend NOT TO DO SO because you don't know what you will get and if it is even worth the Money.

I even had spare 2x 4GB DDR4 S0-DIMMs and a 256 SK Hynix NVMe Drive from my Notebook Upgrade laying around.

Not even 2 weeks after my Order I got the Mini-PC.

This system will be used as a Photo and Video editing machine. Yes you heard right. It will replace my friends Late 2015 iMac 27".
The cool thing about the Intel UHD 630 Graphics is the fact that it supports native decoding of HEVC 10-Bit in Premiere Pro. So the Timeline performance is better then on a i9-7900X 10-Core HEDT CPU. And Quick-Sync even makes the export way faster.

For for the beginning I just used the 256 GB SSD for playing with installing Mac OS.

The full build cost would be:

What you loose is the following:

- no Option for 10GBit Enternet
- no Thunderbolt 3 Ports

Basically that it. Not so much for my liking.

I know, in best case you get your Hackintosh Hardware by the Guides on this Site here, because it was testet by other Users and is known to work in the end.

But wouldn't this be to easy?

Where is the challenge then?
So better start with something maybe nobody tried to run a hackintosh on, with no guarantee that it will even work out in the end.
In worst case I have a pretty good Mini PC running Windows 10.

This is my first Hackintosh just because I'm not a Mac User. I'm a "proud" Windows User and even a Windows-System-Admin in my everyday Job.
My experience on Mac and so even on Hack is mediocre at best. But I like fiddeling around and I like to get things done that aren't so easy.

I first followed this Guide for making a boot Stick: https://www.tonymacx86.com/threads/...ojave-on-any-supported-intel-based-pc.259381/

But I'm not good in reading everything so I lost 2 nights figuring out that I forgot to set the "show all" mark on Disk utility before erasing the Disk (better say Volume because I didn't earse the Disk i just deleted the partition).

The Stick bootet but as soon as I see the Clover Boot Menu it froze, I could not use Mouse or Keyboard anymore.

Maybe it will be fixed with the recommended BIOS Settings?!

One problem of this Hackintosh and maybe also most Notebooks is the fact that you can't really change a lot in the BIOS.
From the recommended BIOS Settings I was able to use one thing, that was VT-d Disable, but this didn't help.

Another night later I took a deeper look into the available BIOS Settings.
And even if I didn't read it anywhere here on the Forums CSM or compatibility support module sounded very good to me.
I wanted compatibility so I activated it and set the following values: And of course VT-d Disable And wow, now I got the system to no more freeze on Clover Boot Menu. I can select Install macOS finally! Yeah, thats it. Its' done. No it isn't.

Now I got a apple boot logo and then suddenly I got a black Screen with a white circle and line in it.

Verbose mode, let me see that it works until a line that says "still waiting for root device" than all the Text gets blurry and the sign appears.

Maybe the NVMe Drive is not compatible in any way? Switched to SATA SSD, same thing.

But this Forum helped me to get past this point. No it havn't helped be but it helped someone else in this Thread: https://www.tonymacx86.com/threads/...ve-install-fails-to-reach-mac-install.278641/

I tried it for me and it worked. Kind off!

right conclusion, used the Mini DisplayPort instead and got to installing MacOS.

Installed like a charm, just got a little nervous when it suddenly rebootet the two times in the process.

In the end I got a working Hackintosh.

Just had some graphic glitches after the installation was finished.

Used MultiBeast like the GUIDE said and the glitches where gone with the needed Intel iGPU Tweaks made in MultiBeast.

Now I'm on the point that I try what works and what doesn't.

- reboot when tries to wake up from sleep
- No Bluetooth (Fixed by using BrcmFirmwareRepo.kext & BrcmPatchRAM2.kext)
- OnBoard Audio for Headphone Jack (Fixed with testing Layout IDs for AppleALC)
- HDMI (no HDMI Output after macOS Bootscreen)
- WiFi (fixed with a Broadcomm DW 1820, 5 GHz doesn't seem to work)
- HDMI/DP Audio (right System definition in SMBIOS needed for WhateverGreen to work)
- Video Playback in QuickTime (In the End works fine now, don't know exactly why it works now)

I got the 1 TB SSD, the 2 TB HDD and the Broadcomm WiFi Card yesterday.

WiFi worked just out of the box, I think because the FixBroadcomm was already installed.

I installed the SSD and HDD and installed macOS again on the new SSD.

As I said, Audio worked for all the installation and as soon as I finish my install with MultiBeast it was gone.

I tried to compare config.plist, devices etc. from the CLOVER Folder of my Boot USB and my macOS Install.
And after literally DAYS I found the "problem" is in the SMBIOS Informations. This is a little bit strange.

The config.plist SMBIOS Part that I used in the installation looks like this: The config.plist SMBIOS Part that MultiBeast creates me as soon as select Mac Mini 8.1 looks like this:

My guess: Some kext is looking into the SMBIOS Part to select the right options. I tought this is just a cosmetic change?

And yes, my guess was 100% on Point, as far as I learned WhateverGreen looks into the SMBIOS Part and selects the right Intel Framebuffer Patch for the selected ProductName based on Intels GPU IDs.

With the old one, ProductName iMac18,3 will not work because it uses the absolutly wrong GPU (no UHD 630 iGPU) but seem to fit the DP/HDMI Audio.

With the ProductName Macmini8,1 definition, the iGPU was the right one but Apple uses special Intel CPUs not the Mobile ones. They use i3/5/7-8XXXB CPUs. They have the UHD 630 thats works fine with this ProductName but DP/HDMI Audio seems not to fit.

From some Hackintool and Framebuffer Guides I found out that Hackintool shows you the best fitting ProductName Setting for the selected CPU and CPU ID.

The System has a Mobile CPU (i7-8750H) so it is near to use a mobile System, I always tought the MacMini uses Mobile CPUs too, but that was missleading. The original Apple System that uses exactly this CPU is the MacBookPro15,1 (MBP 2018 2,2 GHz).

Now with this ProductName DP/HDMI Audio and GPU work as expected and as it should.

I just found out that I get a reboot as soon as the system goes into sleep and tries to wake up again, but this seems to be more or less common.

No I have just two things to fix.

Fixing the OnBoard Audio Port

I just fixed my OnBoard Audio Port by reading a lot and Testing Different Layout IDs for AppleALC.

The Codec is a Realtek ALC269 wich has a lot of layout IDs that could make it work.

I had a lot of luck, because after trying some low numbers I decided I will go from top to bottom and the highest layout ID actually worked, so it is 188 for all that want to rebuild my system. Now, on to the 5 GHz WiFi Problem and the Sleep Reboot.

I hope I can help someone and maybe get helped with my problems.

Have a great day!

Found out where my Audio-Problem is coming from but I don't know how to fix it, yet.

Got the OnBoard Audio Jack fixed

And also got Bluetooth working.

Awesome work so far. Thanks for sharing!

Im got one. Will arrive soon. Plan to help out the thread with ongoing issues too.

rafazafar said:
Awesome work so far. Thanks for sharing!

Im got one. Will arrive soon. Plan to help out the thread with ongoing issues too.
Click to expand...

Wow Thanks man! I'm pretty stoked on getting some help! Let me know when you have yours!

Hi, thank for the report.
I bought the i9 8750 models at aliexpress and I am facing all the problems you've got.

You promised :
Another night later I took a deeper look into the available BIOS Settings.
And even if I didn't read it anywhere here on the Forums CSM or compatibility support module sounded very good to me.
I wanted compatibility so I activated it and set the following values:

Still waiting for THIS screen shot

Never mind, I succeded installing with your help and posted a relatively easy method.

Hi, I succesfully installed mac os mojave 10.14.4 on this :  1) Use Tonymacx86 guide to create usb boot stick https://www.tonymacx86.com/threads/unibeast-install-macos-mojave-on-any-supported-intel-based-pc.259381/ 2) Use theses Bios Config :   3) boot from the USB key and...

bouba411 said:
Hi, thank for the report.
I bought the i9 8750 models at aliexpress and I am facing all the problems you've got.

You promised :
Another night later I took a deeper look into the available BIOS Settings.
And even if I didn't read it anywhere here on the Forums CSM or compatibility support module sounded very good to me.
I wanted compatibility so I activated it and set the following values:

Still waiting for THIS screen shot
Click to expand...

I just updated it!

How far have you come now?