I have an old Power Mac G5 that I bought from the Apple Store way back when, 2004-ish. It was a store demo, so I bought it at a discount (do they do that anymore?), and used it for quite some time, but then retired it to storage, in its original box. Later I bought the Laserhive ATX Low kit as well as the BlackCH front panel cable set, and those sat in the closet for quite some time as the project seemed intimidating adn time-consuming. Well, a recent move unearthed these things, and the @trs96 OptiMac thread got me thinking that this would be a very inexpensive way to build out the G5.
So I acquired a 9020 MT Optimac with i7=4790 and upgraded it to 16gb RAM, and set out to merge the two. First thing was to follow the OptiMac 9020 Golden build guide and install the OS, just to make sure that all functions worked and were supported. Once that was done, I got out the Dremel. (I haven't documented the stripping of the chassis, that's well done elsewhere in here, sorry). First step was to cut the back panel to fit the Laserhive part. I cut as minimal as possible with the Dremel for the curved sections and a DeWalt angle grinder with thin cutting disc for the long straight cuts. All cuts were deburred and smoothed with a fine metal file before final fitting of the back panel (not pictured). Since the "low" kit doesn't allow room for the original G5 long case power supply, that had to be removed and can't be used to house a new supply like the mATX or High kits can. However, I planned on putting a supply in the bottom section and to install a disc drive/writer and keep the hard drive cage in the top section above the shelf. In order to preserve as much of the outside look of the case, I didn't want to drill holes in the bottom, and also wanted to use the original Apple power cord with its rectangular flush-fit mount.

So the plan was to discard the top of the power supply, gut it, and cut it down to work as a mounting sled for the Dell PS (or an ATX supply) allowing reuse of the original Apple IEC inlet plug.

I made the cuts with the angle grinder and test fit. I got lucky with my cutting and the fit was spot-on, just clearing the 120mm fan as well as the LaserHive motherboard tray. I also had to modify the LaserHive back plate by cutting a rectangular hole to fit the Apple IEC AC inlet. The LaserHive motherboard mount makes things so much easier. Knock out some posts, apply screws, mount board, easy. I didn't stop to take pictures. The 9020 motherboard is basically a mATX size, approx 9.5" x 9.5" so there is lots of room, and it fits comfortably below the drive shelf. I took apart the case for the Dell power supply, drilled holes in the base of the Apple PS and then in the bottom (side, as originally mounted) of the Dell PS to match, tapped the holes and screwed the power supply in place on the mounting sled. The bottom looks stock this way, I like it. To keep things simple and to finish the build more rapidly, I decided at this time to use the Dell power supply. It is 290W, 80+ Gold-rated, and as I'm not using a graphics card and likely only SSD drives, power shouldn't be an issue. I can always convert to an ATX supply later.

I cut an old power supply cable to fit the length from the back power inlet to the front of the case where the Dell ps IEC jack resides. Next, stripped wires, ran the ground to the chassis like the original and soldered the others together. Wires are then covered in heat shrink and also I use high temp coated fiberglass mesh tubing as a protective layer over the smaller gauge wires. The power cable fits perfectly. Still to do I need to add mesh cover for the fan. Plastic inner cover fits as it should. Somehow, somewhere, I lost the hard drive screws for the original Apple drive rack...
someone is selling them on eBay for $4+ each, no thanks, I'll figure out another solution. I'm going to be using two SSDs,
there are several mounting solutions that convert 3.5 to 2.5. Rounded head 6/32 screws sort of work in the meantime (not pictured).
Also, the cables are a bit messy, I'll sort that out as well, and find a place to mount that original G5 panel that was on the CPU cooler inside the case. Dual monitors connected via the DP ports! The i7-4760 has the Intel HD4600 iGPU which works fine for general use and my purposes here.
Nevermind the missing fan screws, this was a temporary test run. I have a fan grill on the way and will mount appropriately. I kept the front panel I/O by using the BlackCH ATX cable, and the Dell MB needs two adapters, one for the power switch and one for the I/O, from HarbinRepairs on eBay. Everything works! The only small issue I have at the moment is the power light is momentary, so it doesn't stay on when the computer is powered up, and doesn't "breathe" when sleeping. I may have it wired incorrectly, not sure, have to look closely at that, or it may be an incompatibility with the Harbin adapter > BlackCH cable, which only has a single lead that goes to the + side of the LED.

With only three fans (CPU, PS, and exhaust) it runs cool, temps are consistently in the 30s C. I have a few things to sort out, I'd like to add the original Apple fan to the upper rack for the hard drives, and also mount the original Apple internal speaker. A bit of fabrication to do to make that happen, but for now the G5 lives!
Last edited: Sep 8, 2021

Also forgot to mention the DVDRW drive. I tried to use the unit from the 9020, however the one that came with my Dell, made by H-L Data Storage, doesn’t have mounting screw holes on the bottom. I pulled the one from my HP 8300 and it did have them, so I mounted it using the Apple G5 screws from its IDE drive. Problem was that the disc drawer is just a tad high and gets stuck. I removed the bezel on the DVDRW drawer, and it works perfectly, opening the aluminum slot as the original one did.
Last edited: Sep 7, 2021

Thanks for posting this ! It's quite rare to find an old G5 case with no dings, dents and scratches on it. It's one of the best choices for a case transfer. I like these much better than the newest 2019 7,1 redesign of the CMP.

trs96 said:
Thanks for posting this ! It's quite rare to find an old G5 case with no dings, dents and scratches on it. It's one of the best choices for a case transfer. I like these much better than the newest 2019 7,1 redesign of the CMP.
Click to expand...

I'm glad I kept the G5 all these years, for sure. The original box, keyboard, and mouse are tucked away in the attic. Made for a nice project, and when I feel like upgrading I have lots of room to do so.

Toyo72 said:
Looks like I need to either add cooling fans to the top shelf for the spinning HD, or replace the spinning HD with an SSD.View attachment 528538
Click to expand...

I would replace the HDD, an SSD will stay cool enough in the top shelf without a fan blowing on it. Do you have the DVD inside?.

craighazan said:
I would replace the HDD, an SSD will stay cool enough in the top shelf without a fan blowing on it.
Click to expand...

I've never seen an overheating problem with a 2.5" Sata SSD. They don't move data fast enough to create a lot of heat. M.2 NVMe drives OTOH heat up rather quickly. For some 50C is the baseline temp.

craighazan said:
I would replace the HDD, an SSD will stay cool enough in the top shelf without a fan blowing on it. Do you have the DVD inside?.
Click to expand...

Thanks, that’s what I was thinking. Yes, I have a SATA DVDRW drive in the original position. It will be easier than adapting fans to work, too. 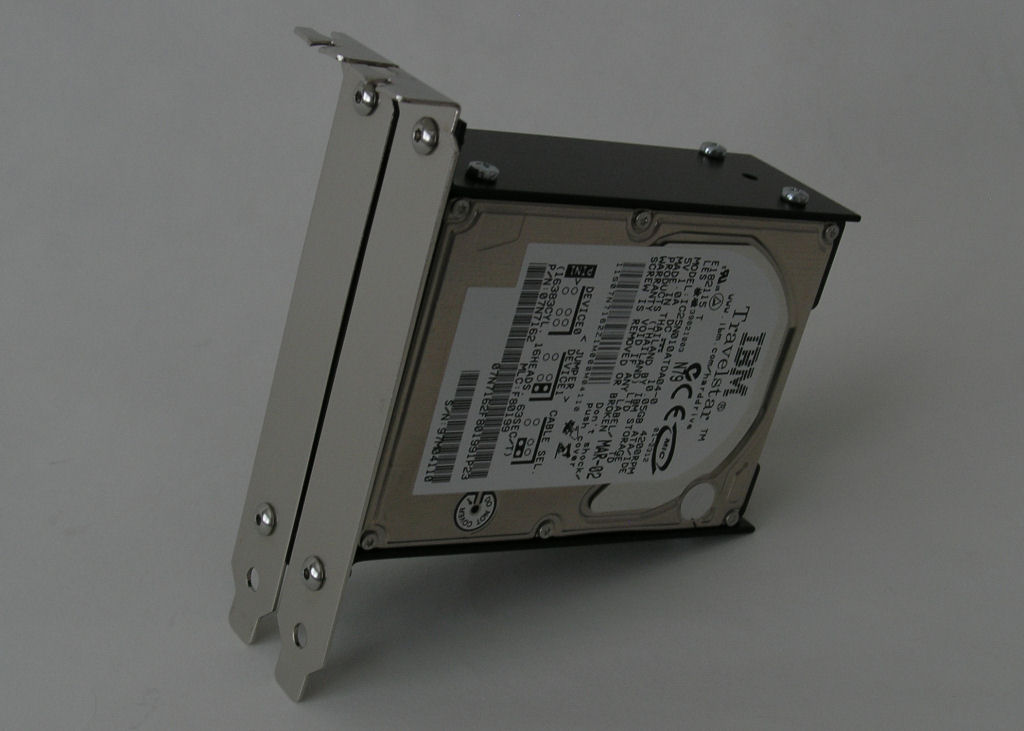 Toyo72 said:
It will be easier than adapting fans to work, too.
Click to expand...

I use the Power Mac G5 housing with all it's fans as from Apple designed. I've replaced the original fans of G5 with ones from Noctua and they are very silent. So why not use the one in the top shelf as designed? It helps to keep the drives cool.