This is our first post here, so hello all! My partner and I are looking to build ourselves a hackintosh desktop inside an old G4 case, which is coming to us for free. However, as this is our first build, we're seeking some advice regarding some parts.

We're planning to follow the tonymac mATX recommended parts list;
We need a triple-boot setup which we plan to run off the SSD, running OSX, Linux and Windows. It will be used for professional digital drawing with a Wacom tablet, 3D solidworks rendering, we wish to run dual 27" HD monitors, with the capability of upgrading to 4K in the future.

Our questions are the following:

If this thread belongs in the case mods section, rather than this one, please move it.

Thanks for the help,
Fil and Miki

Exciting stuff! My old G4 case was my first hackintosh mod too. I learned a lot and made my fair share of mistakes, but it was well worth it and a great first hackintosh project to start with.

Do you know exactly which model G4 you are getting yet?

The only problem I can see facing you right now is your motherboard. The prime issue with most G4 cases is that motherboards mounted on the G4 door and that have four RAM slots generally battle to close, as the extra two slots bump into the shelf that holds the Optical drive. Some arrangements will work if those RAM slots are empty, but seeing as you're looking to spec your build with 32GB, I figure you'll be intending to use those slots.

Solutions for this vary from person to person and build to build, but generally involve cutting or removing the optical drive shelf completely, or opting for a motherboard with only two RAM slots.

Your PSU choice should fit fine, but just make sure the power socket and switch line up with the opening at the back of your specific G4 case. Sawtooth and Gigabit models are pretty forgiving, but newer models like the Quicksilver and MDD are not and will require some ingenuity.

As for your GPU choice, a GTX 960 is by no means overkill. It's really light on power draw and low on heat output, so it won't tax your PSU or add too much heat into a case that doesn't have the best ventilation in the first place. I have a PNY GTX 960 4GB in my G5 hackintosh and it purrs like a kitten. Works great in MacOS with the Nvidia Web drivers and gets me some great 1080p performance with Windows games. It'll drive two 27" monitors just fine, and should even handle two 4K monitors when you eventually upgrade to those. Of course the GTX 960 won't be any good to you for gaming at resolutions above 1080p, especially 4K, but I suspect from your post that you're looking more at a production machine than a gaming rig.
In hindsight, I'd prefer one of the newer GTX 1060s, but I don't think that MacOS or the new Nivida Web drivers support that card yet, which would leave you without a MacOS in your triple boot configuration.

Thanks for the reply, the help is much appreciated!
We'll keep a lookout for a secondhand GTX960 then, we don't game so it should work well by the sounds of things.
Judging by other builds, it looks like some case fans should keep things cool and not too silly price wise.

The case is a graphite Sawtooth case, good to hear it's the more forgiving model. We'll keep this thread updated with the (slow) build. Here's the G4:

The case looks like it's in great condition. That's the Gigabit Ethernet G4 (dual processor?), which came after the Sawtooth architecture G4

@JRDN I guess that calls for a change of thread title!

We're getting ready to order parts, but we have some concerns about cooling. We'd like to use a couple of extraction fans on the bottom of the case, but we're not sure if they will be sufficient. We would definitely appreciate some guidance on this matter!

Macachu said:
@JRDN I guess that calls for a change of thread title!

We're getting ready to order parts, but we have some concerns about cooling. We'd like to use a couple of extraction fans on the bottom of the case, but we're not sure if they will be sufficient. We would definitely appreciate some guidance on this matter!
Click to expand...

Perhaps something to do with Graphite? Sawtooth is a great name and it won't resemble it's original self when you're finished. What's the significance of the name that you did choose?

I've been working on this build since 2012, its been through several iterations. The water cooling was a new venture. I'm cooling an R9 380 with a 120+80+40mm radiators. Stays pretty cool for sure. 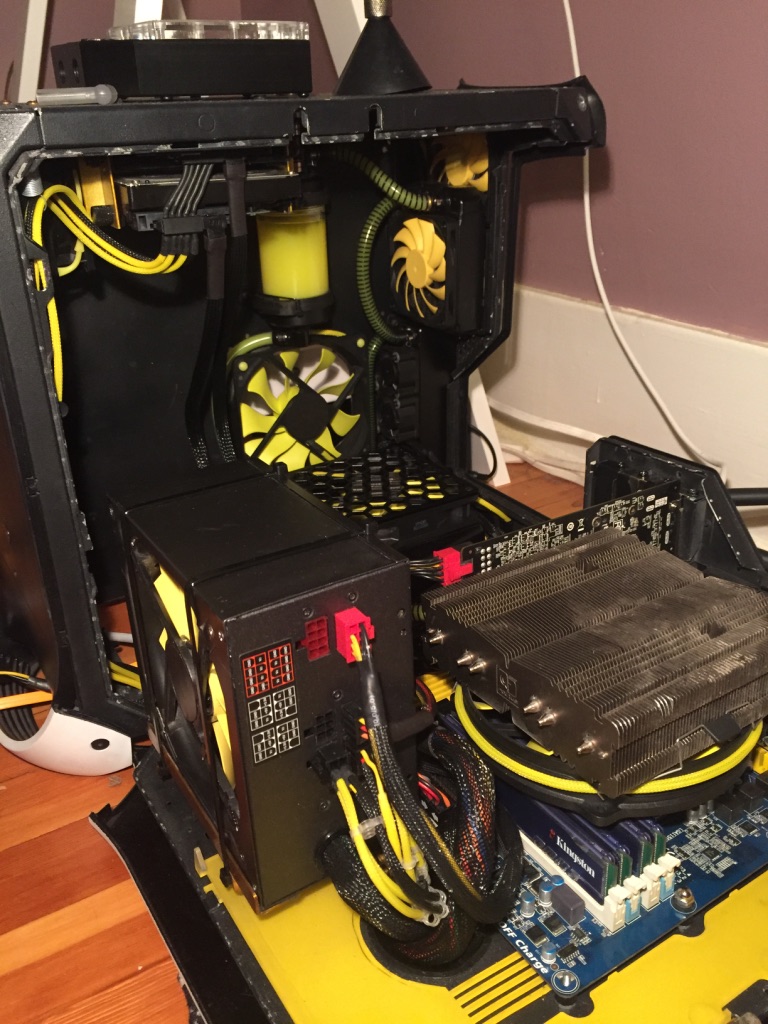 I would definitely recommend some bottom intake fans and rear exhaust. I never added any exhaust out of the top because I would have had to cut the top panel and I didn't like that idea.

My build layout was taken from MacBane. The Sour Apple mod is also amazing.

Things have been a bit busy in our world so macachu was put on the backburner.... till now!

Got the lazerhive conversion kit and a new mATX mono on the way.